An article I wrote has just been published on the Adoramampix blog !  It give suggestions for creative things to try while photographing during the fall season.

Fall into Creativity
by Jacki Dickert

Autumn is an inspiring time for photographers. Whether it finds you photographing richly colored leaves against a bright blue sky or composing atmospheric images of bare trees on a foggy day, fall always presents great potential for creating visually interesting shots.  It is also a wonderful time of year to go beyond the obvious, to engage the imagination, and to push the limits of your creative expression. Here are some techniques to experiment with during this colorful season, as you make your fall into creativity! Colorful leaves are beautiful on their own, but you can sometimes use their reflections to add an important visual element to your images.  If you are lucky enough to be near a lake or stream, look at it from different angles and levels, and notice how the water reflects the colors in different ways.  For the image above, I had to crouch quite low to make the leaves appear to float on the yellow reflections, rather than the blue water.   If you are using a polarizer - as you usually should do in autumn, to cut down on glare on leaves, water, and wet rocks - be aware that it will also cut down on desirable reflections as well.  Adjust or omit the polarization accordingly. 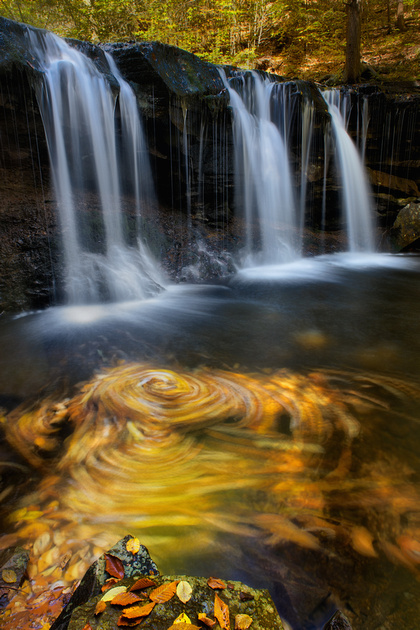 There are several ways to achieve a painterly effect, using motion blur during long exposures. Since long exposures allow a lot of light in, this technique works best on cloudy days or at dawn/dusk. However, it is not impossible to achieve in  bright conditions.  Two especially useful tools in such situations are a polarizer and a neutral density (ND) filter.  Both cut down the amount of light entering the lens, allowing for longer shutter speeds.  Once you slow the shutter speed down, you can “paint”  either by capitalizing on movement already occurring in your subject or by intentionally moving the camera during the long exposure.

The image above shows what can develop when a handful of colorful leaves are thrown into flowing water. It was taken on a fairly bright day, so I needed to cut the light by using a polarizer, dialing the ISO down to 100, and using a small aperture (f16 in this case.)  These settings allowed me to have a shutter speed of 8 seconds, enough time to “paint” the flow pattern of the moving leaves into my image. Of course, a tripod is essential in such long exposures, to keep everything else from blurring.  I also usually use a 2-second self-timer or cable release, to avoid camera movement when pressing the shutter. It’s helpful to study the water first, noting the patterns of movement, and then imagining what it might look like if traced out.  There may already be leaves floating  in the water, or you can toss in a handful to create a natural painting from the resulting movement! 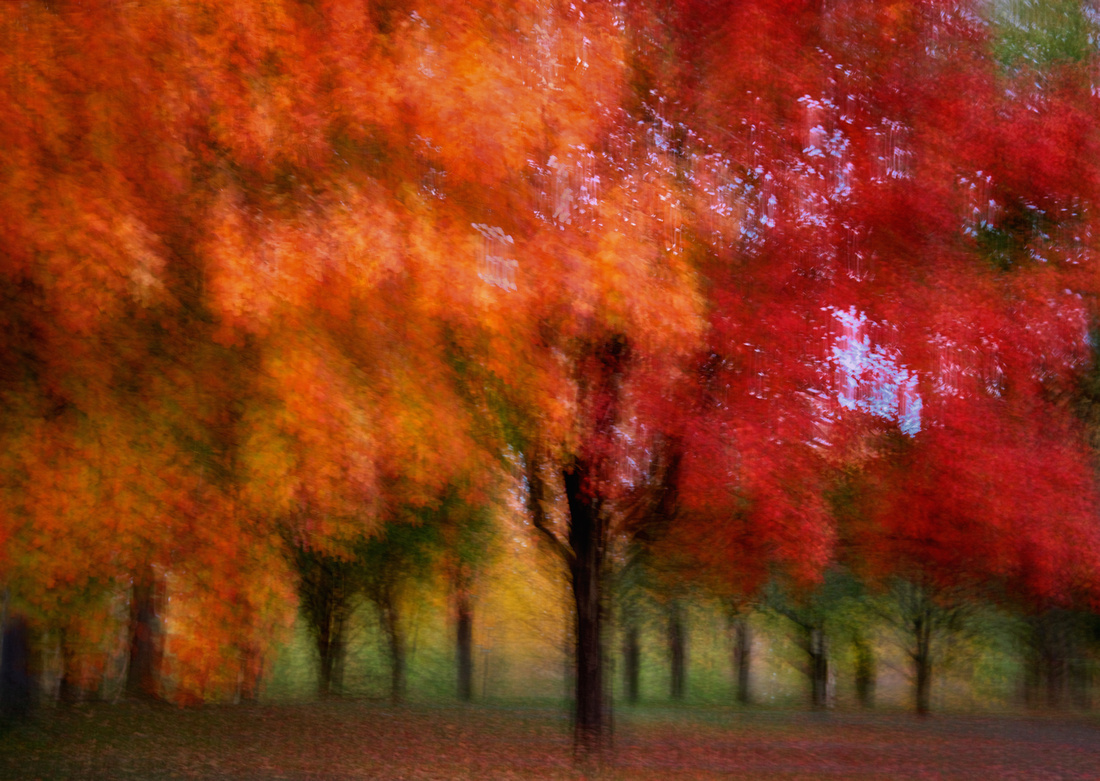 Another type of creative painterly image that works well with autumn colors is made by actually moving the camera itself during a slower exposure. Again, you may need to cut the light by using a polarizer or ND filter as well as a low ISO and small aperture. A shutter speed of around one to two seconds often works well.  The camera is moved up and down (or side to side, or in circles, depending on the major graphic elements in the composition) a small amount - perhaps an inch or two - in the same plane. The more the range of movement, the more abstract the result will be.  Some experimenting is necessary to see what works. Look for compositions with contrasting colors and some definite lines - tree trunks work well, especially with a vertical panning motion.  Try to avoid bright spots from the sky.  Post-processing usually involves adjusting contrast, especially the midtones. Often the results resemble impressionist paintings!

Take Advantage of the Autumn Fog 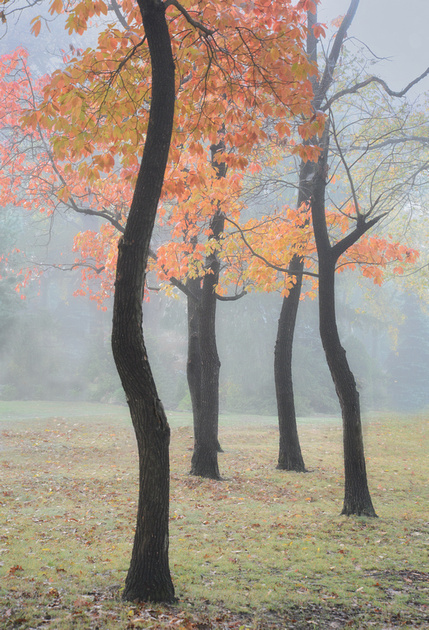 Trees Dancing in the Mist

Boldly colored leaves are even more striking against a soft backdrop of fog or mist.  Such atmospheric conditions are not uncommon in fall. When cool autumn air meets the warmer lakes and waterways, wonderfully evocative atmospheric conditions result, and opportunities abound for rich imagery. Fog often has the effect of simplifying a composition, as potentially distracting elements are softened or obscured, and other graphic elements can take center stage. Autumn in also a great time to find and photograph mist-covered spiderwebs!  Using a zoom lens at maximum reach will help further eliminate background distractions. If your camera has a depth of field preview button, use it to see exactly what will and will not be in focus. Adjust your f-stop so the subject is in focus but the background is soft. 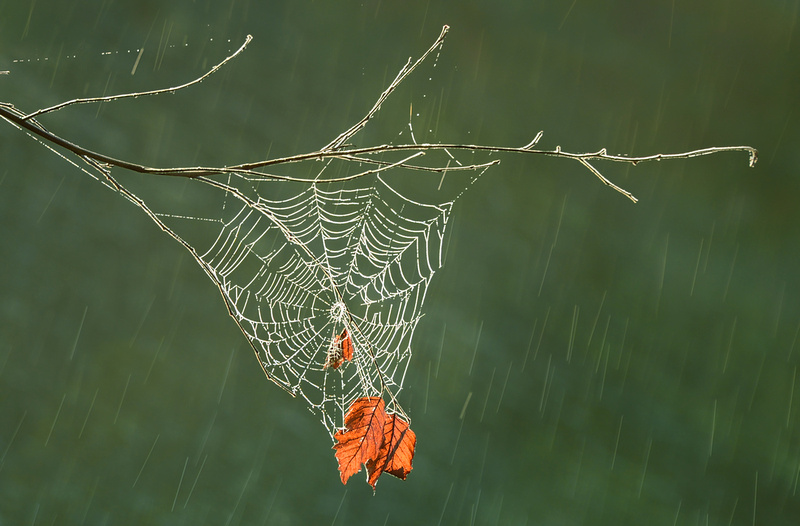 This autumn, get caught up in the beauty of the season by making some creative photographs!